Ed Ruscha invites you on the ultimate road trip: Time travel with him, over 42 years, along the full length of Sunset Boulevard from downtown L.A. to the beach.

Step inside the artist’s 1965 magenta pickup truck, with its blue Naugahyde interior and wimpy-sounding horn. Roll down the windows and let the breeze in, as the vehicle whizzes past the legendary Viper Room, called Filthy McNasty’s in the 1970s. To the left, oh, there’s the Cinerama Dome, showing “The Day of the Jackal” in 1973 and “Back to the Future” in 1985; to the right, a Brentwood hillside minus the Getty Center in 1990. End up at Gladstones by the beach for seafood and cocktails in 2007 because, well, it’s been quite a journey.

All you need is a computer.

On Wednesday the Getty Research Institute announced the premiere of “12 Sunsets: Exploring Ed Ruscha’s Archive,” an interactive database of more than 65,000 Ruscha photographs taken along Sunset Boulevard during 12 road trips between 1965 and 2007. The project uses optical character recognition software, which reads signs in the photographs, and computer vision technology, which tags images. Users can languidly “drive” along a Google-like map of Sunset, with panoramic imagery on both sides of the street or search for locations or objects, such as “Chateau Marmont” or “palm trees.” Scroll east or west on the map or back and forth in time. It’s not dissimilar from Google Street View, but Ruscha, 82, was doing it before the internet was invented — and with the eye of an artist.

“I looked at Sunset Boulevard like a 22-mile-long canvas, with an evolving history,” Ruscha says of why he’s so drawn to the location. “It had fluid motion, fluid stories, one long horizontal ribbon, and I always thought about it. It just asked to be documented.” 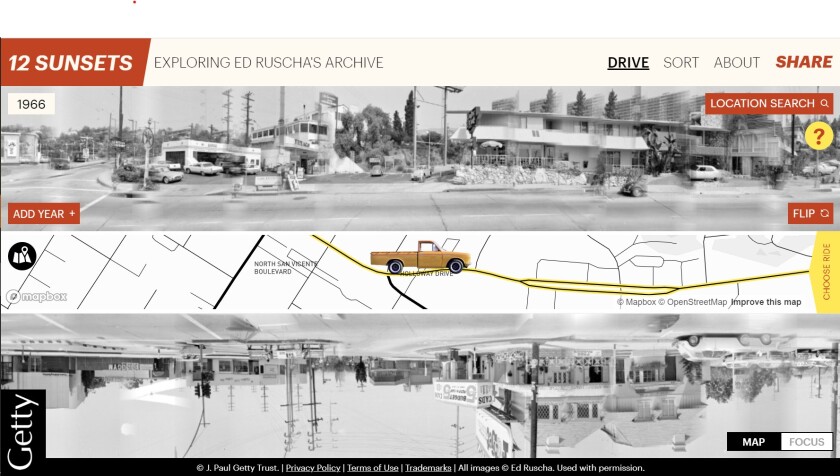 “12 Sunsets” grew out of a larger Ruscha photo archive. In 2012 the GRI acquired Ruscha’s “Streets of Los Angeles” archive, more than half a million photographs of L.A.’s seemingly infinite avenues, streets and boulevards — including Hollywood, Melrose, Beverly, Third and Sepulveda — that the artist painstakingly started documenting in 1965 and which is still ongoing. The most recent shoot, along Pacific Coast Highway, was in March 2019. About 90% of the photographs in the archive hadn’t been printed or seen publicly before, says GRI Deputy Director Andrew Perchuk. His team digitized and cataloged images straight from the film negatives and contact sheets.

But how to slice and dice such a massive archive into navigable groupings for public or scholarly consumption? As a starting point, the GRI digitized only images of streets Ruscha had photographed more than once — more than 150,000 photos in all — so comparisons of locations, over time, could be made. Then Getty art and architectural historians, archivists, catalogers and photographers along with software engineers honed in on just the Sunset pictures to create two interactive databases for different audiences, a process that took about eight years. 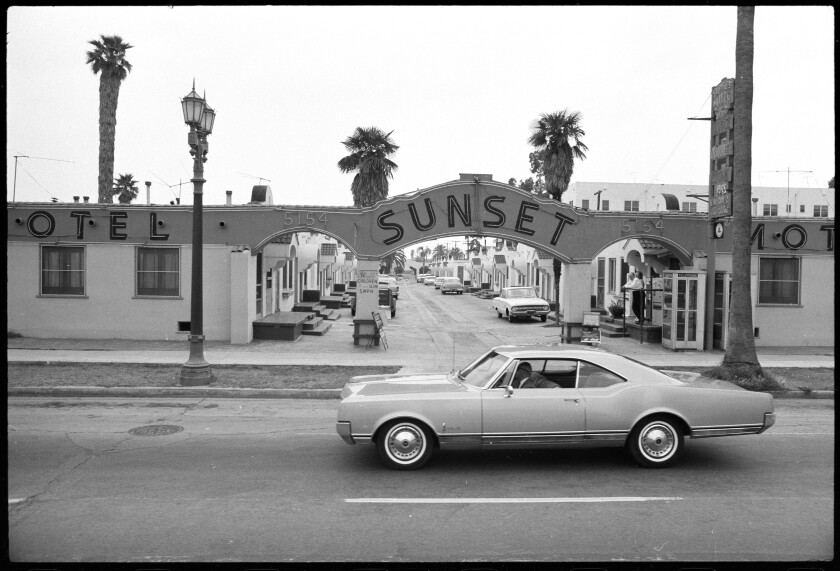 The first database, a “Research Collections Viewer,” is for “hardcore researchers,” Perchuk says. It’s searchable by latitude or longitude points. One research team with members from University of Pennsylvania, Swarthmore College and Harvard University is pulling tax assessor data for all the buildings to tell the story of gentrification and greater economic and social change in L.A.

The ability to compare images over time allows users in both databases to witness L.A. evolving, as architecture, fashion and business trends morph. Postmodern architecture infiltrates L.A. in the mid-’70s, for instance. One six-mile stretch of Sunset shows the consolidation of the banking industry from 1973 to 2007, as 21 banks representing 15 companies dwindled to 11 banks and five companies.

“The other incredible thing is watching neighborhoods and communities come into being,” Perchuk says. “In the early shoots, the eastern part of Sunset is Sunset Boulevard and then you see it become Cesar Chavez. You see the birth of Little Armenia and Thai Town, you see West Hollywood become the center of the LGBTQ community. It really records all of these enormous changes in L.A.” 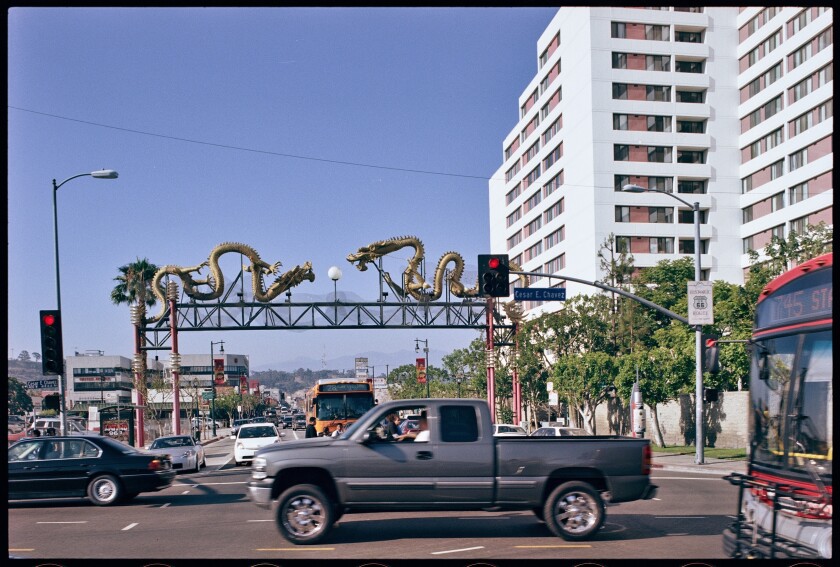 The Getty’s “Streets of Los Angeles” acquisition includes the artist’s workbooks, drawings, diagrams and other materials illustrating how he took the shots, notes he kept so he could revisit sites repeatedly.

Ruscha originally set out on foot in 1965 with his friend, the artist Jerry McMillan. Ruscha supervised as McMillan shot photos with a 35mm camera loaded with black and white film. Ruscha soon realized he needed to move smoother and faster, preferably on wheels, to capture more images in a shorter period of time and from a consistent angle. He mounted a Nikon with a motorized drive on a tripod on the bed of his pickup truck, loaded with 200-foot rolls of film, end pieces leftover from movie shoots that he bought in camera stores. As the truck slowly motored along, each roll captured several thousand exposures, and Ruscha reloaded the camera multiple times, gathering up to 12,000 images in one shoot. 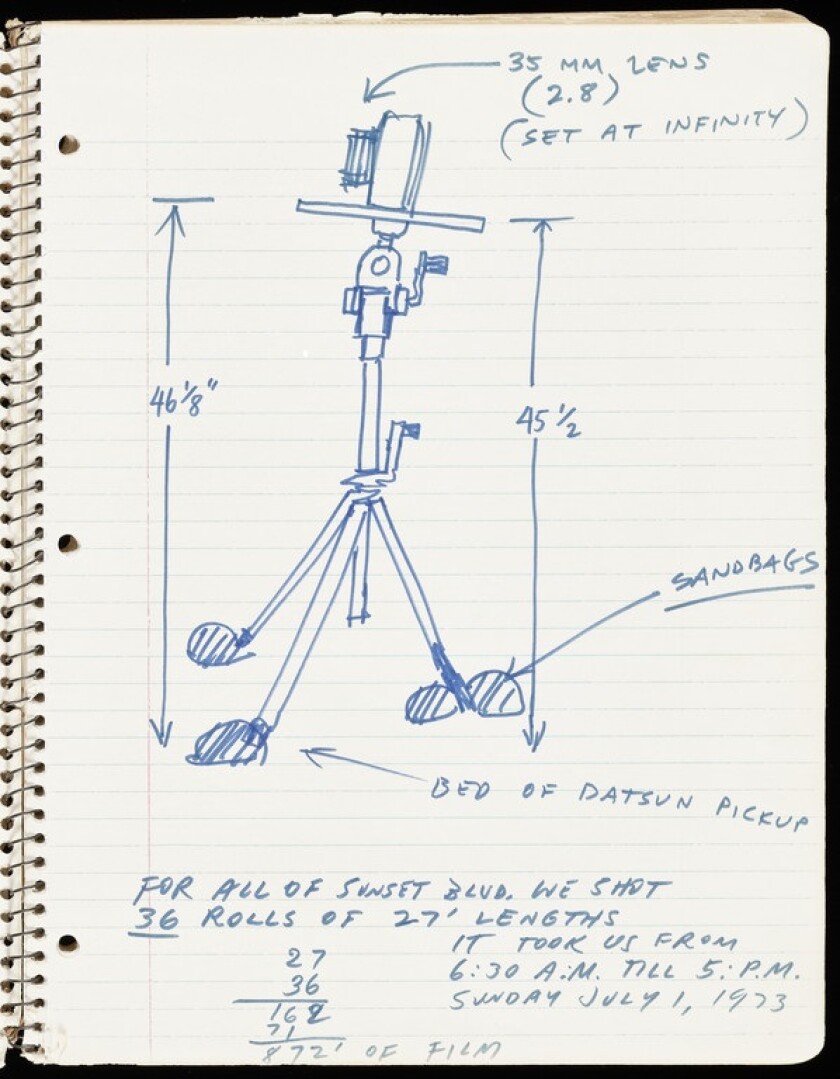 Ruscha produced two books from the larger “Streets of Los Angeles” archive. “Every Building on the Sunset Strip,” published in 1966, is both a photographic feat and physical pun: The book is a strip unto itself, a single accordion-fold page, 27 feet long, featuring a panorama of the north and south sides of the Sunset Strip. The 2005 book “Ed Ruscha: Then & Now, Hollywood Boulevard 1973-2004” featured thousands of photos. Images in the archive have appeared in museum and gallery exhibitions over the years.

“There are very few examples of an artist documenting a city so intensely and so consistently over a 55-year period,” Perchuk says.

Ruscha says the photo documentation work informs his painting and vice versa. “It’s all sort of interconnected,” he says, “little silver threads between one idea to the next, it’s all part of the way I think. All my work, I think of it as kind of a rattlebox full of jiggling ideas, bolts in a blender.”

Perchuk says he hopes “12 Sunsets” resonates not only with art lovers and urban history buffs but with all Angelenos as the coronavirus wears on.

“We hope that at a time when it’s difficult to get out and do things, it gives you that ability to explore, even from your home,” he says, adding the site is configured so that users can share images on social media.

Meantime, Ruscha plans to return to documenting L.A.’s streets as “soon as this whole coronavirus lifts.”

“I don’t see any end in sight,” Ruscha says of his project. “L.A., it’s a real juicy place to live. I’ve loved it and hated it, and now I’m back loving it again.”

“It’s not just capturing the buildings that we’re all so familiar with,” Ruscha says, “but the curbs and the drainage channels and power poles and everything else — municipal concrete — that makes the whole study worthwhile. Because you can go back and compare: ‘Oh, there’s that tree or Mexican fan palm and look what size it is today.’ I just look at it like: ‘This is our destiny.’”