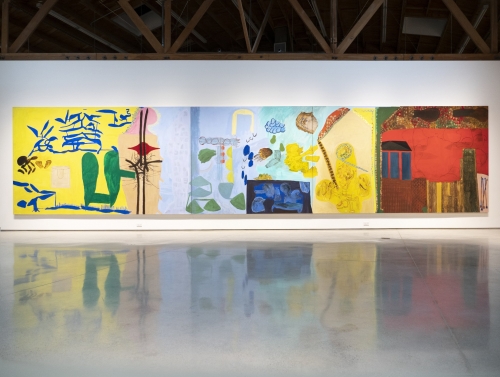 Garabedian embraced grand themes in his idiosyncratic and compelling body of work. Inspired by Armenian manuscripts, Biblical stories, and the epic poetry of ancient Greece, his iconoclastic approach to figuration breathes vibrant, pulsating life into these old tales. His works are populated with warriors and gods, bathing beauties and epic journeys. Abstractions lie unsettlingly at the edge of recognition, seeming to take on the unknowable logic of Olympus.

"If you knew you were going in there to knock out great paintings, it wouldn’t be any fun. This is what makes it interesting to be an artist. It’s the idea of finding yourself and knowing you can be 100% wrong with each decision, each brushstroke. The fun is wandering around in the fog, with a cliff nearby." — Charles Garabedian

Charles Garabedian came to painting at age 32, and was almost 40 before he had his first solo exhibition. Garabedian studied literature and history at USC after serving in WWII, and later began art classes with encouragement from his friend Ed Moses. Garabedian graduated with an MA in Art from UCLA in 1961.

In 1962, Garabedian began showing with the Ceeje Gallery in Los Angeles. He had his first solo museum exhibition in 1966 at the La Jolla Museum of Art, and his first retrospective at California State University Northridge in 1974. In 1978, Marcia Tucker included Garabedian's work in the exhibition "Bad" Painting at the New Museum in New York, which she had founded just a year prior. Numerous solo and group gallery and museum shows followed, culminating in a survey exhibition curated by Julie Joyce at the Santa Barbara Museum of Art in 2011, which drew widespread critical acclaim.

View at Gallery Platform LA
Back To Top