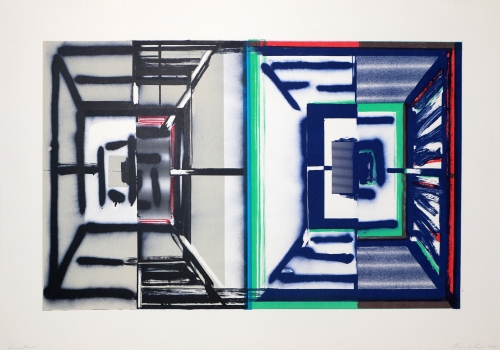 Karen Carson, “Butterfly” (2018) (photo by the author for Hyperallergic)

LOS ANGELES — Karen Carson, who rose to prominence during California’s Minimalism movement in the 1970s, returns to the West Coast with bright, kaleidoscopic, and textured paintings in her solo show Middle Ground at GAVLAK Los Angeles. Since 2016, Carson has regularly retreated to her studio in Montana, and her new works, inspired by the land of big sky, deviate significantly from the minimalist pieces that put her in the spotlight. Carson’s brushstrokes evoke the sharp points of mountains and evergreens, and she adds hand-cut wood to her canvases to create bas-relief forms that mimic rolling hills and valleys.

The geometric paintings pop off their three-dimensional surfaces, forming the edges of deep caverns that pull the viewer’s gaze into their core, but their symmetrical composition blooms into wide eyes that stare back while you stare in.

Though most paintings cling to the same color story, they aren’t quite monochrome. Blues are punctuated with contrasting yellows; reds and purples are differentiated just enough to clash against each other instead of bleeding into a smooth gradient.

Along with the new pieces, some of Carson’s unstretched canvases and zipper pieces from the ’70s punctuate the gallery. These early works were meant to contrast with the male-dominated Hard-edge painting style that emerged in the 1950s and ’60s. Carson embraces Hard-edge’s geometric simplicity, but also rejects it by encouraging people to pull the zippers and rearrange the shapes in any way they desire. In GAVLAK, the canvases are in different stages of being unzipped to show the pieces’ range. Some are drawn far enough that a section of canvas drapes against the concrete floor, others are zipped halfway, creating beige right angles that subtly differentiate from the white walls that become absorbed into the composition.

Though Carson’s new paintings are mainly inspired by nature, Middle Ground’s canvas and wood materials link to modern-day Los Angeles, where over 20,000 unhoused people sleep in tents. More than 50 years have passed since Carson started her career in Los Angeles, but the city haunts Carson’s abstract landscapes. When exhibited in the southland, it’s difficult not to recontextualize her work within its setting, the beauty of Montana at times overshadowed by the living conditions that exist on the streets surrounding the downtown gallery.