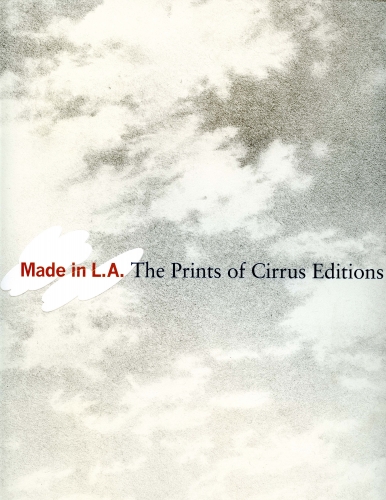 Made in L.A.: The Prints of Cirrus Editions is a catalogue raisonné of all the works produced by the celebrated printmaking shop founded in 1970 by Jean Milant. Over the last twenty five years Milant has encouraged an enabled some of our best-known contemporary artists–including Peter Alexander, John Baldessar, Karen Carson, Vija Clemens, Ed Moses, Bruce Nauman, Joan Nelson, Lari Pittman, and Edward Ruscha–to realize their visions in what was for many of them a relatively untried medium.

Milant, a Tamarind printer-fellow from 1968 to 1970, has been one of the most creative forces on the American art scene, playing a particulary crucial role in placing Los Angeles in the forefront as a center of contemporary printmaking. Disregarding the conventional parameters of this art form, he pioneered the combining of print media, for example, lithography with screenprinting (in early prints by Joe Goode) or screenprinting with woodcuts (in early prints by Jay McCafferty). Moreover, Milant has contiually urged younger West Coast artists to make their first prints at Cirrus.

The Los Angeles County Museum of Art acquired the Cirrus Editions Archive in 1986; works have been added to the Archive each year since. Bruce Davis, the museum's distinguishd curator of prints and drwaings, has painstakingly documented the collection's holdings and in this volume provides detailed informatoin about each work, including year produced, method of printing, dimensions, type of paper or support, inscriptions, edition size, and delineation and number of the various proofs. Dr. Davis's two essays–one a brief history of Cirrus, the other an examination of the prints of Cirrus in the context of Los Angeles art since 1970–offer insightful and comprehensive analysis of a significant current of the twentieth-century art. This volume also contains brief biographies of the sicty artists who have produced work for Cirrus and references to all pertinent bibliographical materials.

This volume was published in conjunction with th exhibition Made in L.A.: The Prints of Cirrus Editions, organized by the Los Angeles County Museum of Arts and held there October 19, 1995-January 14, 1996.